Hi everyone!  Finally I have been able to participate in another soap challenge.  Life has gotten in the way of the last few challenges!  I was a bit excited about this challenge, as I loved the peacock swirl one that we did right at the start.  I considered doing another peacock, and then decided to try the Serpentine Swirl.

I decided everything in kind of a hurry, as I had a limited window, with no kids around and no hubby to distract me!!  I chose a fragrance called Birds of Paradise, and from the description I was pretty sure it would discolour, but for this challenge, that did not matter.

I chose my colours: Blue, Yellow, Green and White.....and used micas to get these colours.  Blue Kamikaze, Lemon Mica, Golden Green and Rutile Sheen for the white.

I actually weighed my soap into the squeeze bottles, so that the colours were even, added my FO to the rest, and put that in the mould.

Then it was the colours:  First the green.... 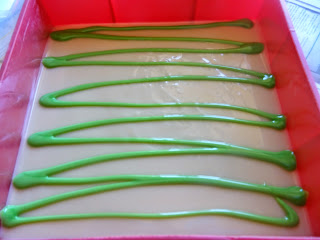 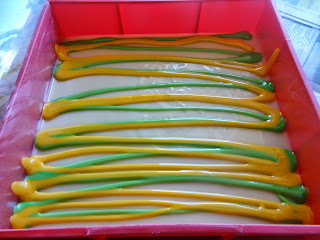 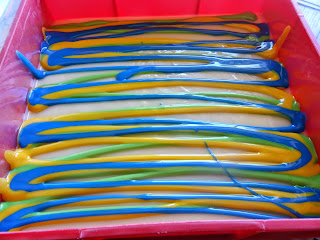 And finally the white.  Did this quite a few times, and then on the last few times, I made sure that my rows of colours were a bit neater. 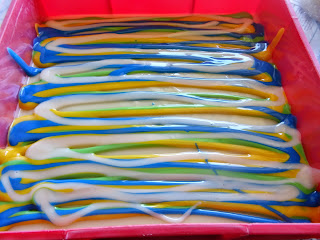 Now....I will confess that I couldn't make a combing tool, as I didn't have enough skewers, so I just did all the lines one by one......time consuming, but I did say that this was a spur of the moment thing, so I didn't really have a choice!  The next photo shows the first lot of lines.... 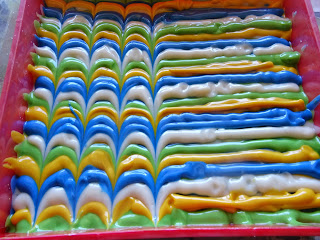 The next photo shows the chevron pattern after the next lot of lines going the other direction, and in the middle of the first lot of lines!......and also the start of my next pass with the mould turned. This shows the soap after all the lines have been done, but before the "s" shape. 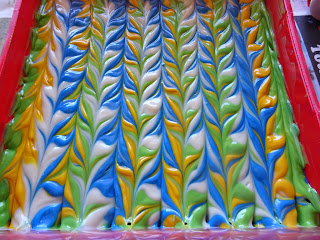 And here is the finished Serpentine Swirl!  I was very happy with how this turned out  :) 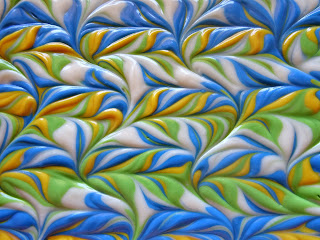 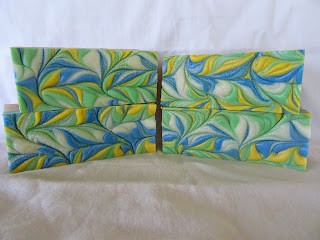 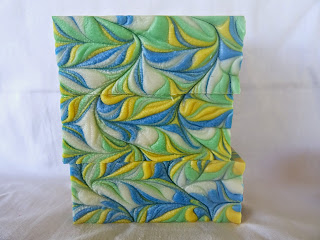 So that is it!  I finally remembered to take photos of the "during" stages of my soap....I always forget to do that!!  I am very pleased with this effect, and probably would do it again, but I am so tragically
challenged when it comes to cutting slabs, that it may be a while!

Thanks Amy, for yet another challenge, that has challenged me!!

See you all next time