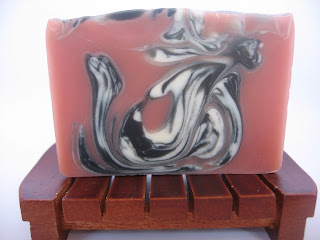 Well, it's that time of the month again!  Soap Challenge time courtesy of Amy Warden and Greatcakes Soapworks.

This month the challenge was to recreate the "Holly Swirl", so named after a swirl that Holly from Missouri River Soaps did in one of her You-tube videos.

My last try, I used Black Raspberry Vanilla Fragrance from Bramble berry.  I decided to use a red base colour and black and white for the inner swirl.  I chose a new recipe that I have been working on, that is slow to trace, and it worked a treat!  I used Ruby Red Mica  for the red colour and Activated Charcoal for the black and Titanium Dioxide for the White.  I poured the white and the black soap mix into another jug and did a bit of a swirl.  then I poured the red base mix into the mould.  From a height I poured the black/white soap into the mould, and then changed heights until all of it was in the mould. I forgot to take photos of this process!!  Ooooops!  I then did a bit of a swirl on top, sprayed with alcohol, and put it to bed. 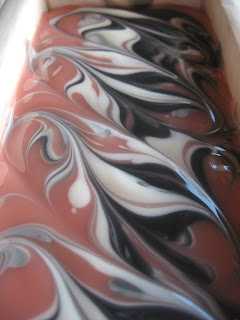 Next day I cut it and got the best surprise!  It looked good!! So here is the final photos of my "Holly Swirl", scented with BRV (love that smell!). 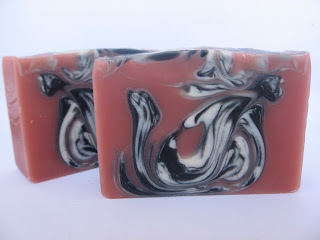 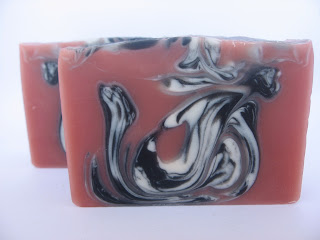