Hi there!  Been a while between posts!  I would just like to tell you all about a little project I have begun working on.
In my extended family we have 2 children who have Autism.  I have watched these two families cope with this for a number of years, and often wondered how I would have coped had it of been me.  About a month ago I got to thinking....what if I make a soap specifically to try and raise a bit of money for Autism Awareness.   I had decided while I was lying in bed thinking about it that it had to be a Rainbow Soap.  My next step was to contact both families and find out if  they thought it was a good idea, and also if I could use their sons' names in the name of the soap.  Luckily enough for me they both thought it was a fantastic idea!
My next step was to try and formulate a recipe that would be slow moving enough for me to work with the 6 colours for the rainbow.  As my normal soap recipe can sometimes move a bit quickly on me, I had to think of something else!  I devised a good one that is working so far for me!  I also had to find fragrances that would not discolour or accelerate trace on me.....Energy and Kumquat from Brambleberry were perfect...and can I just say they smell divine!
My plan is to sell the soap and donate $1 from every bar sold to an Autism Charity.....so far the response has been awesome, and I had to make another bigger batch today!  Hopefully I can make a reasonable amount of money for Autism Awareness.....I guess it comes down to how much rainbow soap I can make!!
So here is the first batch of Josh's Rainbow  and Dexter's Rainbow (I will alternate the names, if you know what I mean)! 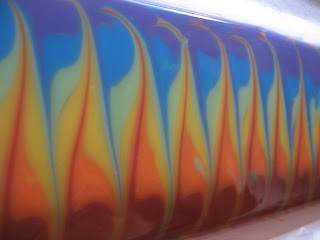 The top of the first batch, scented with Kumquat Fragrance Oil. 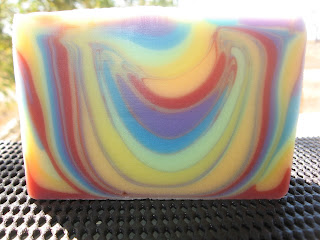 This is how it turned out....used micas for all of the colours. 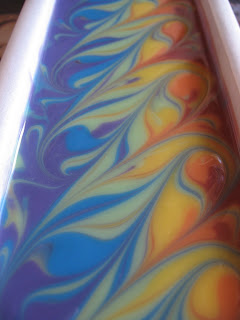 And the top of the second batch I just made.....this one is scented with Energy Fragrance Oil.

So that's it for now.....hopefully I will be able to donate heaps of money to this worthy cause.