The Creative side of Soaping

As a soap maker, I guess being creative is part and parcel of the job.  But occasionally, you are made to think even more creatively when a challenge is set.  I am a member of The Soap Making Forum on the internet, and for a few months running we had a monthly soap challenge with a specific theme.  I was pretty keen to take part in these challenges, as it made me think outside the box a bit, and made me steer away from my normal swirls and patterns.

The first one I took part in was "A soap depicting a song from the year you were born".  When I saw the theme for this one, i couldn't even begin to get my head around how to depict a song!  So I hit GOOGLE, and finally came up with "Moondance" by Van Morrison.  ( The year by the way is 1970.)  So then my next mission was to figure out what to do.  I made a white embed in an old gladwrap tube.  Then I mixed some different shades of blue, in what I hoped would end up looking like a night sky.....then I put it all together, and the end result was the following soap.  I scented it with Love Spell, as I thought it kind of went with the mood of the song! 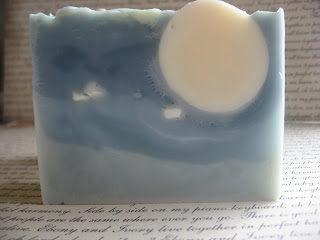 The next challenge I participated in, was the theme of "Mythology".  Now this one had me stumped!  So once again I hit GOOGLE, and almost instantly I found a Greek Myth that I thought I could work with.  It was the myth of PERSEPHONE - Queen of the Underworld.  She was the goddess of Spring Growth alongside her mother Demeter.  One day she was seized by Haides and taken to the Underworld to be his bride.  Her frantic mother searched everywhere for her, and finally discovered that her husband Zeus had conspired in her abduction.  She was furious, and refused to let the earth fruit until Persephone was released.  They relented, but because Persephone had already tasted the fruit of Haides, Pomegranate Seeds, she was forced forever to spend a part of the year in the Underworld.  Her annual return to earth in Spring is marked by flowering of meadows and new growth, and her return to the Underworld in Winter sees the dying down of plants and the halting of growth.

This I thought I could work with....so I planned my soap......predominantly black for the Underworld, with bright colours representing the colours of Spring Growth, and scented with Pomegranate Fragrance Oil.  So here is "Persephone - Queen of the Underworld" 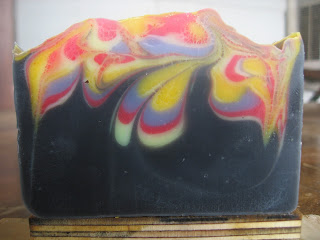 The last one I participated in was create a soap depicting your LOCALE.  Well I had thousands of ideas running through my head for this one....it was just a matter of getting them all into one soap!!  As I have mentioned, I live in Central Queensland in Australia.  In our region we have Coal Mining, Cattle Grazing, Crop Farming and Dairy Farming.  I wanted to put all of these into my soap.  So I added a little bit of Cow's Milk to my recipe for a start!  I scented the soap with Lemon Eucalyptus Essential Oil ( because I figured that Eucalyptus is a good Australian scent)  and the I put a black layer on the bottom, depicting the Coal Mining, then a layer of green, depicting Cattle Grazing, but I also put a pinch of ground oats in this layer for the Crop Farming part as well!  Lastly I did a white layer with some black blobs, which were meant to look like the Dairy Cow.....and here it is....."Callide Valley" 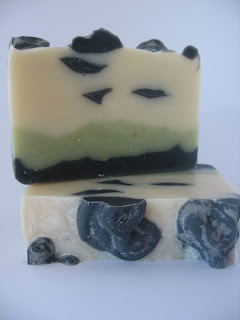 The main reason for this post is that I have entered Amy Warden's Soap Making Challenge Club, and this Month it is the "Peacock Swirl".  I will update you all on how that went soon.  These previous challenges helped me get the confidence I needed to be able to say....Hell yes, I can do this!  I'll let you know how I go!
Bye  :)
Posted by Unknown at 21:24